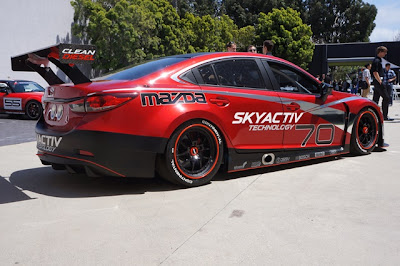 #70 Mazda6 with the SKYACTIV-D turbo diesel showcar where the two turbo assist devices are used primarily to cool the engine as opposed to directly add to the development of power or torque. Image Credit: Edmund Jenks (2013)

In 2013, the Grand-Am racing series for full-bodied GT cars added a new class of racing platform to its field of formally pedestrian but hardened sedan cars that can be purchased from dealerships around the country. The GX Class will have 13 models from 12 different manufacturers to choose from, based on the list of cars eligible for the new GX class in the Rolex Sports Car Series. Eligible cars announced for the class include the Lotus Evora GX, Porsche Cayman, Mazda6 with the SKYACTIV-D turbo diesel, Audi TT, BMW 1 Series, Chevrolet Cruze, Ford Focus (four door), Hyundai Genesis, Subaru BRZ, Scion FR-S, Nissan 370Z or Altima, and Volkswagen EOS. 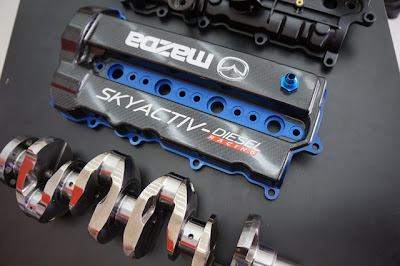 Joel Miller and Andrew Carbonell drove the #00 Visit Florida Racing Mazda6 to the win, with team-mates Sylvain Tremblay and Tom Long finishing third in the similar #70 SpeedSource Mazda6 SKYACTIV-D.  It was a three-way battle for most of the race with a Porsche Cayman splitting the two Mazdas.

This win represented a day of firsts for Grand-Am competition and for Mazda Motorsports.  This is the first-ever win for a diesel-powered car in Grand-Am competition.  It also marked the first win for the all-new Mazda6 in any race series.  It was the first Grand-Am race win for drivers Joel Miller and Andrew Carbonell.  Miller is a former Mazda Motorsports Scholarship winner, having won the Skip Barber National Championship in 2007.  Carbonnell has been racing Mazdas with Freedom Autosport for many years, and was part of the team that delivered the 2011 Continental Tire ST Manufacturers Championship to Mazda.  Carbonell was substituting for Miller’s usual teammate, Tristan Nunez, who had a schedule conflict with another race in Long Beach. 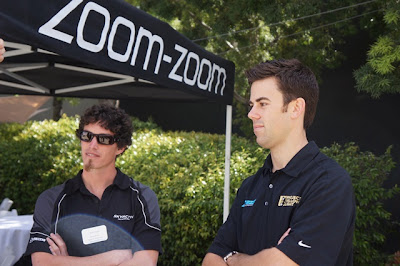 GX Class Mazda6 driver Joel Miller (r) discussed how driving a diesel-powered race requires a different, “more loving” feel in acceleration and shifting than other gasoline fueled race cars. It is kinda like “hyper-miling” for the race track because the strongest power band on diesel performance is a little tighter with lower RPM at the top of the range. Image Credit: Edmund Jenks (2013)

“The new Mazda6 prepared by SpeedSource ran perfectly,” said Joel Miller, co-driver of the #00 Visit Florida Racing Mazda6 in a post race interview. “The torque of the SKYACTIV-D pulled up the elevation changes around Road Atlanta circuit strongly and the Mazda6 handled beautifully. During the course of the race we attacked when needed and paced ourselves when required. The event had only one caution during the two-hour and 45 minutes race, thus there was hardly any time to relax. The SpeedSource crew was in constant communication with myself and co-driver Andrew Carbonell as we worked through traffic. Bringing home the victory for the SpeedSource crew who worked so hard on this program brings great joy and I cannot wait to continue the [development] program. Over the past eight years Mazda has taken me from karting through their ladder program. I’m proud to be racing the Mazda6 and to be a part of Mazda history in gaining the first SKYACTIV Technology victory.”

Joel Miller is the Southern California driver who’s mother gave title to a 2011 documentary featuring the Star Mazda Series, an open-wheel driver development series that has since changed its banner to the Pro Mazda Series. “Driven To Race” was billed as a documentary film effort about what it takes to win which garnered several film festival awards when it was debuted. 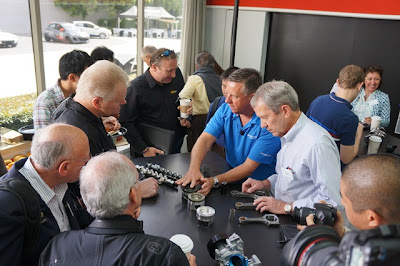 Sylvain Tremblay, owner of SpeedSource Engineering, explains what changes were made to the Mazda6 SKYACTIVE-D clean diesel engine pistons for racing in the Grand-Am GX Class at the Mazda Motorsport 2013 media kick off meeting. Image Credit: Edmund Jenks (2013)

The truth behind this new Mazda6 SKYACTIVE-D development and win in the Grand-Am GX Class can be summed up by the owner of SpeedSource Engineering (the engineering firm behind the race tuned Mazda effort), Sylvain Tremblay. “While Joel and Andrew sprayed the champagne, this win truly defined the expression, ‘team work.’ The victory is shared with everyone at SpeedSource, Mazda North American Operations and Mazda Motor Corporation, and is a tribute to the thousands of hours of hard work over many months,” said Sylvain. “After that rough debut at Daytona, everyone stepped up to make sure we had a fast, reliable car as soon as was humanly possible. The normal plan with a new car is to spend the first year in development, the second year seeking race wins, and challenging for a championship in year three. We are already at our year-two status after four races. We can’t wait to get to the Belle Isle course in Detroit for round five.”