The IZOD IndyCar Series experimented with a format of holding two street/road course races at the same venue over the same weekend and by most anyone’s standards, the weekend was a great success.

This was be the first time IndyCar had tried this format for this type of racing (not an oval) and going in, people wondered if the physical demands of driver and track could hold up to the pressure and rigors of two 70 lap races in two days … after all, the drivers were not just turning the car to the left all the time and last year, parts of the track surface came apart with about 25% of the race still to be run.

Another concern was the potential of the typical spring pop-up shower but the weather only became a bit of a factor during the first qualifying session on Friday – the rest of the weekend was fine. 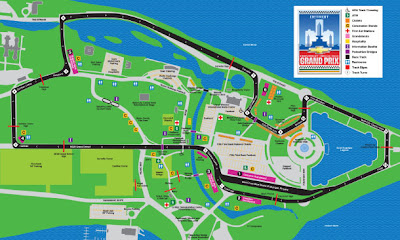 In hosting the inaugural IZOD IndyCar Series doubleheader in the Chevrolet Indy Dual in Detroit presented by Quicken Loans, there are several new features to the street circuit for the race weekend **Extended the circuit to create more overtaking opportunities. A half-mile straightaway between Turns 2 and 3 has been added **More than 100,000 square feet of road surface has been refurbished **Curbing at Turns 3 and 4 has been reworked or removed to create tighter turns and, consequently, more overtaking opportunities. Image Credit: IICS

The first race was an exciting affair that featured passing due to the new, longer and wider configuration and very few YELLOW Flag cautions. The race was won by a first time winner from a smaller team that has two British drivers for street/road course races – Mike Conway driving for Dale Coyne Racing’s Sonny’s Bar-B-Que sponsored Honda-powered Dallara DW12.

Justin Wilson, Dale Coyne’s full-season driver of the Boy Scouts of America sponsored Honda-powered Dallara DW12 had won the only other races for the team with two wins (one street/road course and one oval) came in at P3 giving the team a first-time double podium. 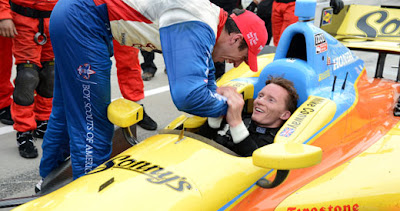 Before the Dual in Detroit Race 1 was run, in the morning’s warm-up and Race 2 qualifications session, Mike Conway had already secured the Pole position for Race 2 so there was a lot of anticipation for Conway to become a double race winner for this first Dual in Detroit and take home a $50,000 prize in doing so.

The following New Media entries are a combination of Tweets from Twitter and comments from the author in observance to the events that transpired during the Dual in Detroit Race 2 (best read with highlights from the 2nd Dual in Detroit Race video running in the background – turn up the volume!) … welcome to the 7th race of this 19 race IZOD IndyCar Series 2013 season –

@Joshua_Rogers
Dinger wads up another car. Perhaps he needs to stick with vehicles with fenders. #IndyCar #DetriotGP

@MattEmbury
@IAIndyFan Several as I predicted before the race, interesting though that Power and Pagenaud stayed out on reds. #indycar #detroitgp

@WoodsiesGarage
Josef Newgarden slows on the backstretch as the track goes yellow again. Most of this race has been run under caution. #IndyCar #DetroitGP

@TomcatNASCAR
16 laps of #IndyCar is already more exciting than 375 laps of #NASCAR.

@Pablomg228
Difference between Indy and F1: Indy drivers have the guts to try to pass in places like this #detroitgp #indycar

@tonydizinno
Yellow again, wiping out an 8.8 second lead for @Mikeconway26, aka the Stig, aka Conweezy. #IndyCar #DetroitGP

@CarlsonsRaiders
Meanwhile, they’re back to green once again in Detroit! #Indycar #DetroitGP

Vautier touches Sato and sends TAKU in the wall

@RLenziBlade
It’s official: At the 26th lap, half of the #DetroitGP has been run under caution. #IndyCar

YELLOW Flag – Power gets punted from behind, Wilson, Carpenter, Viso, Tagliani, and Briscoe all involved – Sebastien Bourdais is the culprit on the punt that collected

everyone – Hinchcliffe busts a wing on the way through

@CarlsonsRaiders
Will Power clearly pissed at Bourdais, decides to just throw his gloves rather than the double birds this time. #Indycar #DetroitGP

Riiiight … it’s just the drivers that are falling apart

@elmondohummus
You know, this race really DOES represent Detroit: No matter what efforts you bring, it all goes downhill. #indycar

@neilhudson
Conway already up to fourth, will be third when Bourdais serves his penalty if he even waits that long #IndyCar

@racer_27
First Hinch and Will Power is back too! All hail #IndyCar mechanics. #DetriotGP

@spunk72
Man, @Mikeconway26 is driving this race LIKE A BOSS.  #Indycar  #detroitgp

@Deke15
That replay of Conway passing the Ganassis looked like he DROPPED THE HAMMER and the others were standing still. #IndyCar

Kanaan pits and comes back out in 12th

@4TheLoveOfIndy
This is Ganassi’s best shot at a win so far in 2013. Currently occupies 2-3-4. #IndyCar #DetroitGP

@mfriedman_63
Really, almost anyone can win these Indycar street races. Except the expected favorites! #DetroitGP #Indycar

@drewallennews
Pagenaud gets around Conway. Those tires are done. #IndyCar #DetroitGP

Conway in the pits – back on Blacks! – Conway out at P6

@kenspi
This–> “@curtcavin: Great tweet from @BourdaisOnTrack “Seb avoids all the mess.” Uh, he helped cause the mess. #IndyCar”

@MADMAUtwotwo
3-wide racing on the streets of Detroit!!!!! @IndyCar #indycar

@miller_j18
once they’ve figured out how to not hit each other, this is getting good! #IndyCar #DetroitGP

Pagenaud in and out and ahead of the Franchitti Conway battle

@INDYCARPR
Of note: these are the first laps led on road/street course for @JamesJakes. #DetroitGP #IndyCar

@michaelw2000
Anyone notice that Power is getting closer to Bourdais?!?! LOL!!! I sense a “Duel” coming! About 4 sec difference! #DetroitGP #IndyCar

There is racing all through the top 10

@drewallennews
Pagenaud is one of those drivers who has constantly been knocking on the door. Does he get his first win today? #IndyCar #DetroitGP

@99forever
In the top 3, Pagenaud and Jakes both just set fastest laps of the race. Jakes’s was faster. #IndyCar #DetroitGP

The top 3 cars are all in sight of each other – what a grand street course race … real ChampCar racing is back bigtime!

@julesia18
ABC is picking the WORST times to go to commercial!!!! #indycar

@CarlsonsRaiders
Pagenaud is the fastest guy on track right now, doesn’t look like Jakes or Conway have anything for him. #Indycar #DetroitGP

@indycaradvocate
Jakes trying to hold on to P2. Big day for Pags and Jakes both. #IndyCar #DetroitGP

@Jose_Galvan
The lethargic ABC @IndyCar announcers are describing an exciting race as though it were a medical procedure. Come on! #indycar

@IndyCar
. @simonpagenaud out up front with just a couple laps to go! #IndyCar #DetroitGP

Conway closes on Jakes at 2 LAPS to go

@therossbynum
At this point the circus clowns just tumble out of the clown car. Exhausted. Clown union preparing strike as we speak.  #IndyCar #DetroitGP

Race 2 Podium drivers congratulate each other during the cool down lap at the Chevrolet Indy Dual in Detroit presented by Quicken Loans. Image Credit: Nicolas Dura via Twitter

@CrashGladys
BEST DRIVERS IN THE WORLD! 6 winners in 7 races, from 6 different countries. It doesn’t get any better than THAT, race fans! Epic

@AutoweekRacing
Pagenaud wins #DetroitGP ahead of Jakes and Conway, but Conway was the undisputed star of this race and the weekend. #IndyCar

Honda-power captures the top 5 positions with more horsepower than Chevy-power … in DETROIT!!!

Overnight television ratings for ABC’s live telecast of the second race of the Chevrolet Indy Dual in Detroit on June 2 grew 14 percent over last year’s Sunday telecast, which also aired on ABC.